24 Things You Should Never Buy at Kohl’s 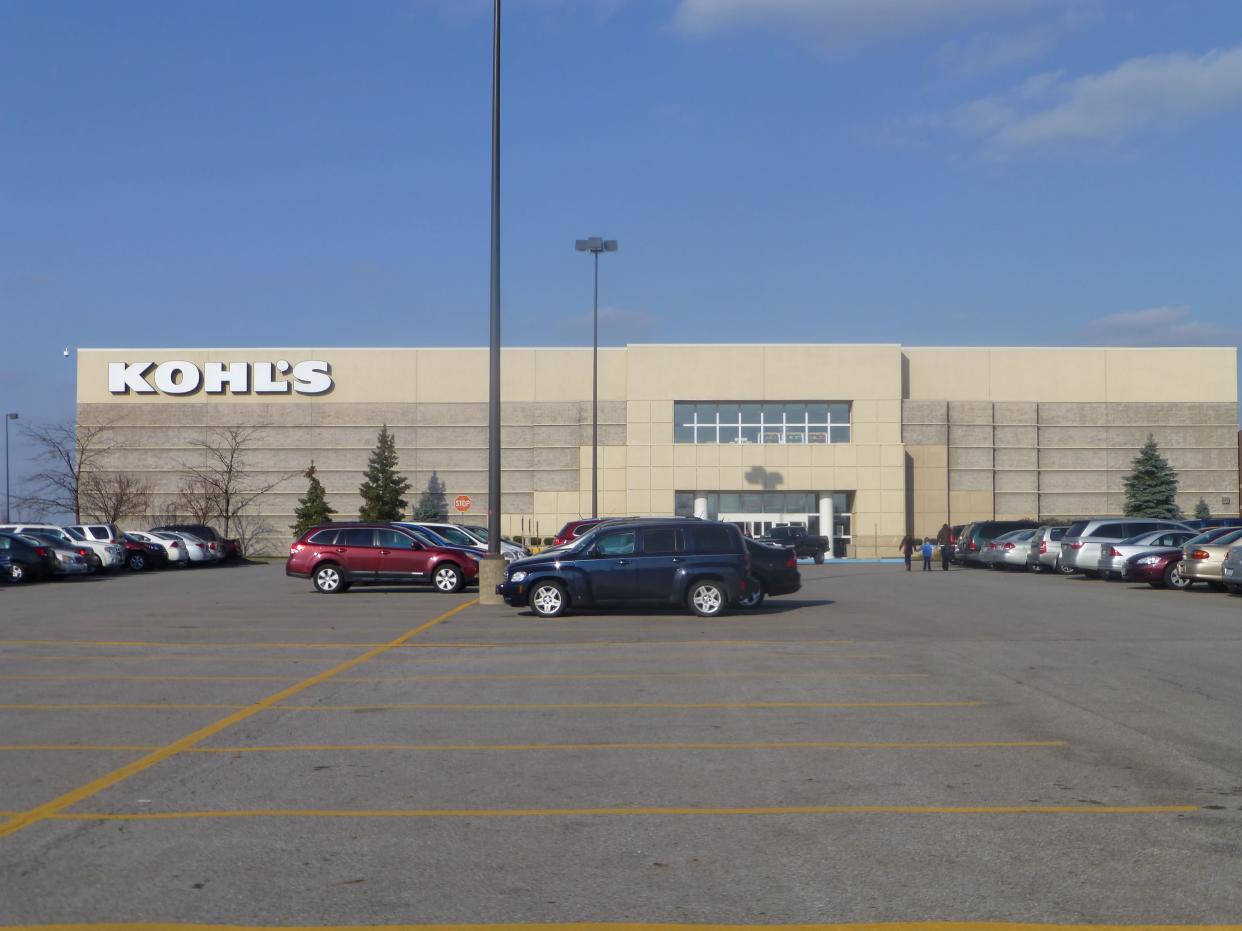 Online shopping gets easier and easier, and at this point, it’s generally far more preferable to visit a store’s online presence than their real one. Kohl’s is a prime example — with its enormous, sprawling department store options available without having to actually set foot into the real world, you might find yourself doing quite a bit of browsing. The good news for you is that we’ve already scoured thousands of reviews across their online store, and collected the worst products for you right here, with everything from portable radios to kitchen appliances to luggage. Here are 24 things you should never buy from Kohl’s. (Can you think of other items? Please share them in the comments.)

Novelty and entertainment-referencing clothing should generally be avoided unless made directly by the studio, but Kohl’s massive collection might entity you. Skip it, as tons of people complain about the quality and immediate fading of the letters and design. This particular Mandalorian hoodie? Many reviewers have called out how hard to read the actual design is. And that’s before it fades in the wash.

Related: 51 Clothing Brands That Are Still Made in America

“Flat flat flat,” one reviewer says, and that seems to be the common issue here. If you’re decorating your couch with throw pillows, you don’t want them to be tiny and flat, and these Stratton Home Decor Tweed Throw Pillows are exactly that. This is of course not as bad as another reviewer’s nostril assault where the title of the review says it all: “They stink!”

Related: 30 Things You Should Never Buy on Amazon

Spending $85 on a miniature nativity scene is not something we’ll pretend to understand, but chances are you’d be as furious as the other reviewers when you see just how small they are. Though the description says they are 7 inches tall, the comments speak for themselves. Things like, “smaller than I thought,” “tiny,” and “very misleading” are plastered all over the comments. Move along.

For more smart shopping tips, please sign up for our free newsletters.

To call a singular piece of wood a “3-piece set” is what some might consider, and that is because it is in fact fully a lie. Much to many customers’ surprise this three-piece set is actually just one shelf. One customer sums it up best with, “I wouldn’t count screws as part of a 3-piece set.”

“True garbage” is just about all you need to read to get a sense of what customers think of these Android tablets. Many people have complained that with even two apps installed, the devices are so overloaded that they can barely function. You’ll see the word “slow” in just about every review — save yourself some money and just use your smartphone to watch movies or play games.

What we’ve got here is a modern marvel of terrible UX. Starting with the fact that there’s no way to tell what mode the radio is in and leading all the way to the fact that there’s no way to turn it off without removing the battery, this is a disaster. “There is no way to know for sure if it is off,” one customer writes. “It’s difficult to tell what mode it is in, and with no instructions as to what the digital codes mean one has to guess. Often left on unintentionally, it goes through batteries quickly.”

Sometimes a bad purchase isn’t too complicated: Sometimes, the darn thing just doesn’t work. That’s what we’ve got here with this trying-to-be-high-tech door knob. “Doesn’t work half the time,” one reviewer says. “It will not set a code,” another says. You’re not James Bond. Get a regular handle.

Related: 103 Tech Products That Will Make Your Life Easier

Even brands you might trust — like Shark — aren’t immune to the onslaught of criticism about horrible things to buy at Kohl’s. Complaint after complaint shows the Shark Navigator Lift Away Upright Vacuum is a nightmare, barely cleaning anything and taking an army’s worth of strength to operate. One reviewer mentioned they were “sweating and out of breath” after using it, while many others say that it just doesn’t do its job. Save your $220.

Already found a better vacuum than the Shark, but now need a steam mop? Don’t fall for the Cleanica360’s trap. What you’re paying $120 for here is basically just a regular mop, seeing as most reviewers have pointed out that the steam function doesn’t work. You’re better off with a Swiffer Wet Jet.

Related: How to Make Sure Your Appliances Don’t Fail When You Can’t Get Them Repaired

There are all kinds of exciting secrets hidden in this 36-pair adjustable shoe rack. For starters, several buyers have pointed out that the shoe rack won’t work unless placed on the outside of your closet door, which is a decor choice that we can’t possibly understand. The complaints don’t stop there — “No sooner than I had it loaded with shoes, the bottom bounced away from the door letting all of them fall into a pile on the floor,” one customer says, while another points out that, “ It would need to be screwed into the door, thus damaging the door. Without being screwed in, the shoes just fall out the back.” This thing’s a trainwreck.

We’re not sure what they’re using to ship the Novogratz Owen 6 Drawer Dresser, but it doesn’t seem like it’s doing the trick. Scuffs, scratches, and broken parts echo throughout the reviews, but even if you’re lucky enough to receive one that’s fully intact, you might find yourself as angry as a reviewer who noted that “the drawers will not open or close.” That part seems important for a dresser.

When you’re paying $142 for something, you probably don’t want to see the word “garbage” more than once in the review section. Unfortunately that’s what you’re getting with Baxton Studio’s coffee table, a piece of furniture that multiple people attest to receiving without properly lined up screw holes — and in one case, without screw holes at all.

Fresh off their last miss, Baxton Studio is pulling up with this 3-drawer dresser that suffers from, you guessed it, all of the same issues. Holes not aligned, broken parts, and damage abound here as well. One customer even received a damaged item twice in a row. Whatcha doin’ over there, Baxton?

Hat-tricks! The ever-missing Baxton Studio is back in action with a 4-shelf platform bed, and somehow ugliness is not its greatest crime. In typical Baxton Studio fashion, damage and cheap quality are the focus of the reviews. Do yourself a favor and avoid a $500 bed that’s made out of particle board.

$52 for a rattan side table that’s “not even strong enough to hold the lamp”? That’s a no-go. Nearly every review mentions how poorly made this is, and one is even titled “Trash.” That’s all bad enough, but after reading “Adhesive left gross looking residue all over the table,” we’re all the way out.

We can probably all agree that wicker baskets are at their best when they are not shedding and making “a mess every time you pull them out.” The worst part? This reviewer says it best: “The other major flaw is that when the baskets are not in the cabinet, if you wanted to use just the shelf … there isn’t a shelf. The baskets are not supported by anything but pieces of wood on the sides.” Promise us you’ll hold onto your $265.

A bunk bed is not the type of thing you want to get on the cheap — the last thing you need is a “Black Sheep” situation where the top bunk is collapsing onto the person below. With multiple reports of cracked legs and (oftentimes off-color) broken wood, that seems incredibly likely. For $700, you can do 700% better.

A perfect addition to your bathroom or kitchen, eh? Before you drop a cool $86, check out what other purchasers have had to say first. Heavy on the 1-star reviews, this Zenith Slimline rolling organizer seems to consistently arrive in bad condition, with chipping paint, holes that don’t line up correctly, and measurements that are entirely inaccurate for the item.

$25 is a lot to spend on some thin pieces of metal that are likely to break after only a few uses. With 113 1-Star reviews, you’d expect more from a mixer attachment the KitchenAid name. Many people noted broken wires snapping out of place almost immediately … maybe this is a job for Amazon Basics.

It’s 7 am You’ve woken from a rough night of sleep and as you’re meandering across the house to get ready for your day, all you can think about is your morning cuppa joe. Strong, black coffee tantalizes your senses as you begin to brew with your brand new Black + Decker coffee maker, until finally the moment has arrived: the moment of that first sip. You close your eyes and tilt your head back as your palate is overwhelmed by the taste of … paint? More than one person found the black paint inside the coffee maker cracked and chipped, resulting in, yep, coffee that’s filled with paint. Hard pass.

Related: How to Satisfy Your $5 Starbucks Habit at Home

This is some Sweeny Todd-level stuff right here. For nearly $100 you can be the owner of this Jersey Mike’s-style food slicer, but please: Be careful, as there are multiple reviews about how wobbly and unstable this thing is. Don’t lose any fingers or toes over your deli sandwich.

Just about every review is the same here: Within a month, this Kalorik 22-qt. Digital Air Fryer Toaster stopped working entirely. And that’s if you’re lucky enough not to get one where “the plastic threading was stripped on the knobs after two uses.” Throw in the intensely high volume the air fryer reaches when operating, and you’ve got something that not only doesn’t work, but sounds like it’s going to explode.

Related: 50 Kitchen Gadgets That Are a Waste of Money

Luggage has but one primary job, and that’s to make sure your stuff doesn’t come out of it. With handles that “didn’t even make it from the car to the airport,” as one reviewer says, this is going to prove quite difficult. Don’t spend $230 on a luggage set that looks like it’s made out of titanium and for sure makes a terrible noise when you hoist it off the baggage claim conveyor belt. The airport is not a place where you want to make your life more difficult.

Don’t be fooled by the beachy white-wood look of this clock-photography mashup. Nearly every customer has received a fully broken item, pointing out the incredibly flimsy material this beauty is made out of. Add to that the fact that the hands of the clock don’t seem to work, and this is a pretty disastrous purchase.

Samsung Online Shop Support If you’re blind or partially sighted, you’ve come to the right place for products that help you live independently and enjoy everyday activities. Why not have a look at our best sellers, our new products, or our special […]